Luke Madson Is Just Bee-ing Himself 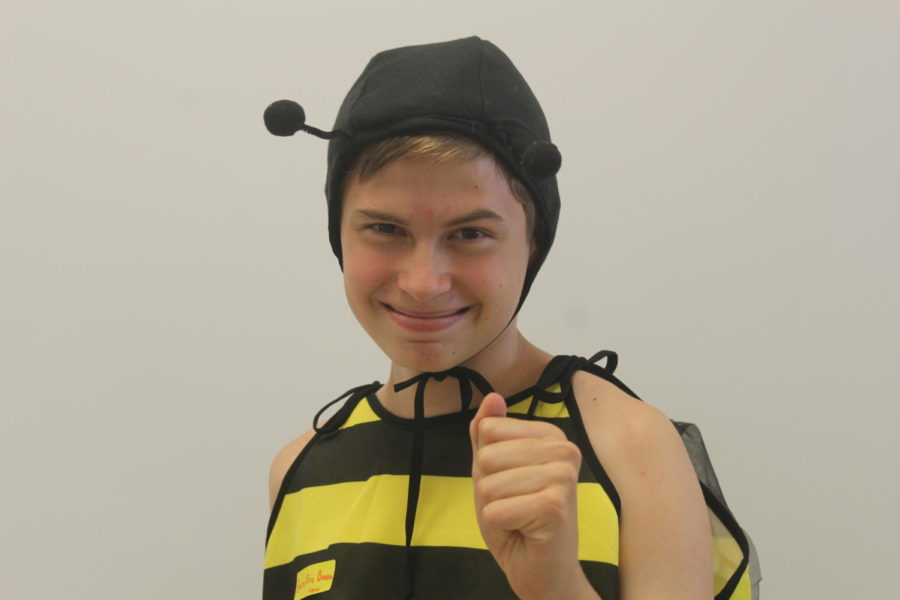 September 7, we open on a seemingly normal day. The sun is out, the weather is warm, and students can bee seen enjoying their lunches in the outdoor courtyard of the school. But then a giant bee showed up.

Loud slapping noises, staring eyes, and one student donning neon apparel is the center of it all. Luke Madson, a sophomore at Highland, is walking around the courtyard dressed like a bee.

One of Madson’s favorite things to do is to dress in costumes. The first costume he pridefully displayed was Santa Claus.

“The first time I started wearing costumes was right before Christmas, I got a Santa beard and a hat, and I made a scarf full of bows, and I put on a sweatshirt, and I just ran around giving people candy,” Madson said.

However, Madson wasn’t always as brandishing with his attire as he is now.

“The first time [I wore a costume to school], I was kind of nervous, but I decided not to care what other people thought of me, which is weird because I care too much, and I care about what everyone thinks of me, but at the same time I don’t. So I do what I want, but I’m self conscious about it,” Madson said.

Madson owns various costumes for a variety of different occasions and holidays, his favorite of which being a female nurse costume.

“My favorite of all of them is the nurse costume, because I dressed up as a [inappropriate] nurse before the blood drive,” Madson said.

Madson is just beeing himself.  The bee costume is just his latest experiment. Madson eats lunch in the courtyard regularly, but there are constantly wasps flying around lunches and chasing away the otherwise content students. Madson decided to take action, providing a community service by ridding the outdoor seating area of many of these pests. What better way than to attack from the inside?

Going undercover, he decided to blend into the wasp crowd by dressing as a trusted cousin, the bee. Once inside the swarm he removed one of his shoes and slapped the wasps. Madson went so far as to eat one and trap the other in a box naming it Barry Bee Benson Jr., he of course, being Barry Bee Benson Sr.

Madson also has an Instagram account, which is filled to the brim with a detailed account of his various costumes, complete with both photos and video. His followers seem to support his choices in attire, leaving loving comments and words of encouragement.

The movies often projected towards the teen-age group often portray shocked and negative reactions when a student “breaks the status-quo,” however, at Highland, reactions were positive, and made everyone smile.

“Most people like it actually. I bet some people think I’m weird. I don’t really care, because it makes people like me and that’s what’s important,” Madson said.

This may be an unusual sight for the few choice students who witnessed it on this particular day, for Madson it is not that unusual at all, he does it for several holidays throughout the year and other times when he just feels like it.

Not only does Madson feel comfortable being himself, but it is also an opportunity for him to make connections and bring an air of joy into a usually dismal and repetitive routine. The mood was joyous, people laughed as he ran around trying to defend students from the looming insects circling the courtyard tables. Then, the bell rang.

As much as the students enjoyed the exuberant entertainment they witnessed at lunch, they were a bit surprised to see it continue past the break in the middle of the day.

“Well I didn’t think he was going to keep it on in class,” Highland sophomore Zoa Daigle said.

Yes, that is correct, Madson continued wearing his costume into his next period, AP World History with Kyle Bracken. Yet another unexpected attitude could be viewed in this new classroom setting. Rather than being a distraction or causing alarm in the teachers’ case, Madson once again brought a different card to the table. Even though his appearance was anything but subtle, he remained a respectful student throughout the class, along with his peers. It might be expected for an occurrence such as this to distract from school work, but the hard-working students of HIghland continued to focus their energy on bettering their education. One of the students in the class who had also been in the courtyard at lunch did not think that it took away from the focus required in an AP classroom.

“I don’t think (it disrupted the learning), because it was mostly just a lecture with the teacher talking to the class so everyone was focusing on the teacher instead of him,” Daigle said.

Madson got to add a little fun and energy to his day and the days of others while maintaining a learning environment. By not fearing what others might think he made a point simply by being himself that it is possible to be yourself in a very obvious and attention-attracting way while still completing the task you are expected to complete. Bracken was not at all surprised by this either.

“You know, I have to say, not to be arrogant like a teacher or something, but I’m not really surprised by that much anymore,” Bracken said. “ It’s like in New York, when people walk around in all different ways, and New Yorkers aren’t really shocked by very much, and that’s kind of how I am. Nothing really freaks me out. I saw it and I just kind of went on.”

Not only is Bracken unfazed by Madson’s and other student’s more eccentric attire but he actually enjoys seeing it. To him it is a positive element that creates a more joyous environment.

“What I always assume when somebody is doing stuff like that, is that it’s something that makes their day a little more fun. It’s not something that is worth me getting upset about,” Bracken said. “ If they’re at school and they’re having some fun, we probably need more of that. We probably need more people who enjoy their time here and make someone else laugh a bit.”

This leaves many questions unanswered. Will the wasp problem in the courtyard decrease as a result of these endeavors? Are other teachers as supportive as Bracken? Did the rest of the students feel unnerved despite appearances? And most importantly, what will Madson do next?