Ker Family Bond Is Strengthened By Their Sport 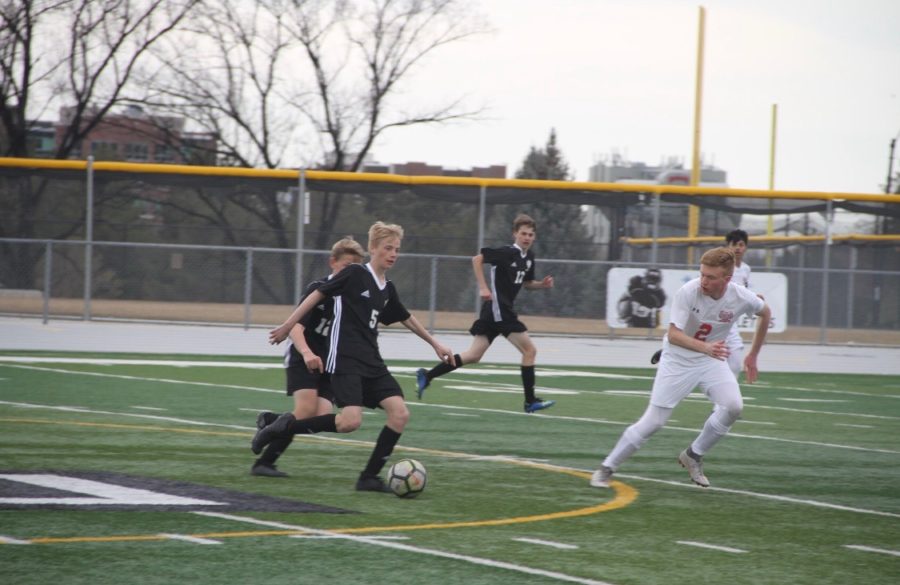 Sam Ker is a sophomore that was an important starter for Highland's soccer team this season.

Cristin Ker sits at the dinner table every night with her husband and two twin sons, Sam and Jake. Although the twins measure half a foot different in height, immediate resemblance is seen when they open their mouths and begin to talk about soccer.

“Our mom sometimes gets mad at us,” Jake said. “When we are eating dinner, [soccer is] all we talk about.”

All it took was a coaching commitment from the boys’ dad, Max Ker, and persuasion from a family friend. Jake and Sam began their soccer careers in 2007 and the Ker household has never known anything different.

All members of Highland’s varsity team, in one way or another, all three Kers are constantly talking, playing, and living soccer.

“[Our dad] was a rec soccer coach for Impact,” Sam said. “He started us young just like our sister.”

The twin brothers started at the age of four with Impact United on a recreation league with friends that lived in the neighborhood. Max volunteered to coach the kids’ team and their bond around the sport began.

“[Jake and Sam] have always been athletic and I could tell that they were both natural soccer players,” Max said. “I’ve been coaching them for 12 years now.”

The family has never known anything different. The sport of soccer has been a family focal point for as long as anyone can remember.

Cristin Ker, mother of Jake and Sam and wife of Max, strongly believes that the relationship that the three boys share is more important than any of the tension that may arise.

“[Jake and Sam] really love their dad as a coach,” Cristin said. “I just love that they are together all the time.”

Saying “all the time” is no understatement. Jake and Sam were both on the varsity team this year at Highland and practiced five days a week for multiple hours a day. Sam was there, Jake was there, and Max was there as a new assistant coach.

Both Sam and Jake are so grateful to continue to work with their dad during the highschool season. The family talks often about their feelings toward Max being with the team through everything, and they all agree that being together is far more rewarding than any other part of the situation.

The Rams this year possibly worked harder than ever before. The Kers saw the season come to a close without taking home a win, but are hopeful to build the program over the next two years to strengthen their chances of winning and advancing into playoffs.

Sam was an important starter on the team this season and has been playing both attacking mid-field and wing. Unfortunately, due to a foot injury in an early game this season, Jake, who was sophomore captain of the team this year, was unable to play in the majority of the games this season.

“I felt really sad that I couldn’t play the sport I love,” Jake said. “Especially being captain this year, I felt like I had let the team down.”

Jake recently was cleared to walk on his foot and is looking foward to getting back on the field soon.

Soccer for the Kers is not just the sport that they participate in to get physical activity. The sport is a part of their school life, their social life, and their home life.

“It’s really funny at home because we all talk about our practices,” Sam said. “[Our dad] talks to us about everything involved with the coaches and players, basically all the gossip on the team.”

Along with being a part of the “inside scoop,” having a dad as a coach gives the boys a chance to know their dad in a way that many kids don’t get to experience.

“You know how it is. You go home and your parents always ask you, ‘How was your day?’” Max said. “I know a lot more about their day because they talk about it at practice and I am part of the conversation. I am involved in their lives a lot more because of the sport.”

Max can’t imagine what life would be like if he wasn’t a part of Jake and Sam’s soccer careers. The relationship the three have would be completely different.

Not only does Max view coaching as a coaching experience, but he believes his job of teaching kids life lessons is more important than anything he could ever ask for. His leadership, ethical values, and perseverance leaves a mark on the players, which is special in it’s own way.

As the boys look back on their recent sophomore season with the Rams, they are excited to see what their future holds with the game they enjoy being a part of the most. Jake and Sam play soccer all year and when they aren’t playing for Highland’s varsity team, they play at the top of their age group for Impact’s premier competition team.

The family aspect of the sport sticks out in the Kers’ minds and the connections they feel with each other and the other members of the team is too strong to ever be replaced.

The boys are hopeful of what Highland soccer and Impact United has to offer them in their near futures and consider continuing their soccer careers at the college level. Catch Max, Sam, and Jake on the soccer field next season and try to spot Cristin cheering them on in the stands.