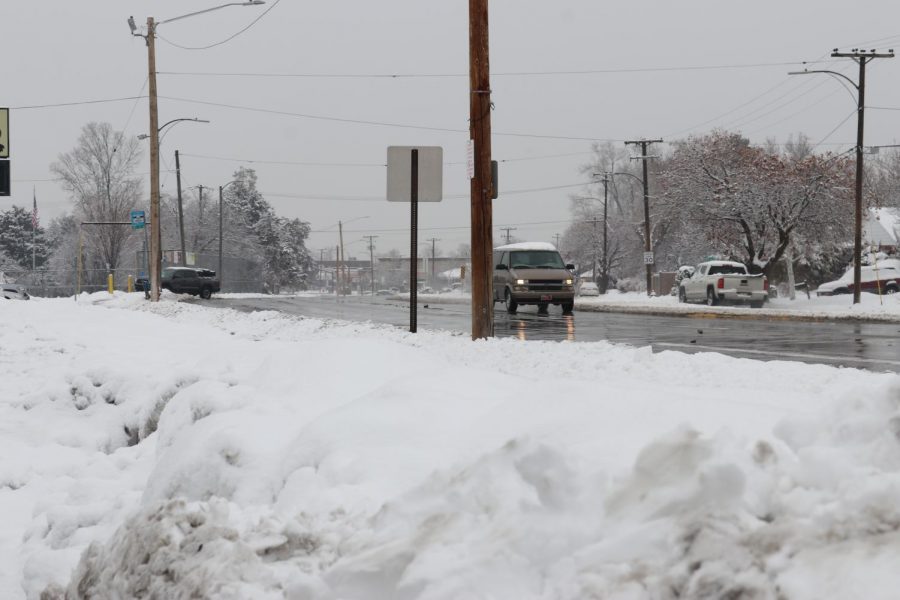 Snowy roads make it difficult for students to get to school.

Several inches of snow, slick roads, and new drivers trying to make it to school on time—what could possibly go wrong?

It is not the ideal combination for many students, who often risk a lot more than being marked tardy to attempt their commute.

Dawson Bramble, junior at Highland, learned this on the morning of Thursday, February 6  after being t-boned by another vehicle when exiting the freeway.

“I was pulling out and then this car who was supposed to stop at a light kept driving and just hit me in the side,” Bramble said.

Thankfully, Bramble escaped the incident free of any injuries, though his car wasn’t so lucky, acquiring a large dent in its side and $1,000 in expenses after factoring out insurance.

The car’s current state will be a source of inconvenience, making Bramble dependent on his parents for rides. The incident also left Bramble shaken up immediately afterwards, and its impression is unlikely to leave any time soon.

“This is my first winter driving in the snow. I haven’t really thought about it much but now after the accident I’m gonna be really careful and maybe even more scared to drive in the snow,” Bramble said.

According to a study published in the Bulletin of the American Meteorological Society, the risk of a fatal crash increases by 34 percent when precipitation is falling. Bramble recalls passing at least four or five other car accidents while driving, which is no surprise as the Utah Highway Patrol had reported 157 crashes by 10:37 a.m.

“For living in Utah, people sure don’t know how to drive in snow,” Bramble said. “I think just driving in the snow is a really stressful situation for everyone.”

Bramble recognizes that the incident could have been avoided had either he or the driver of the vehicle been paying more attention to safety recommendations for winter driving.

“Controlling your speed, actually looking where you’re driving [is important],” Bramble said. “If he swerved he could’ve missed me and just hit a snowbank but he was not paying attention… I also probably could’ve been more attentive…if I had swerved out of the way or I had been going slower he could’ve caused less damage to my car.”

Rebecca Franco, who is in charge of the attendance office at Highland, says snowy days like this one are frequently missed by students.  She estimates over 20 percent of the student body to be tardy or absent on such days, with only around 2 percent of this amount actually calling in to the office to explain severe weather being the cause for their absence.

When it comes to missing school for this reason, she simply recommends that students make a reasonable decision.

“If you feel like getting on that road is going to put your life in danger, that’s [when you should stay home],” Franco said. “I do recommend that people call in.”

If you do decide to drive in the snow, keep in mind to be extra cautious; drive slow, increase the space between your vehicle and the one in front of you, accelerate and decelerate steadily, be aware of your surroundings in order to avoid obstacles, drive in the tire tracks left by previous vehicles, and don’t let features like all-wheel drive lead you to overestimate your abilities—after all, no one is invincible.