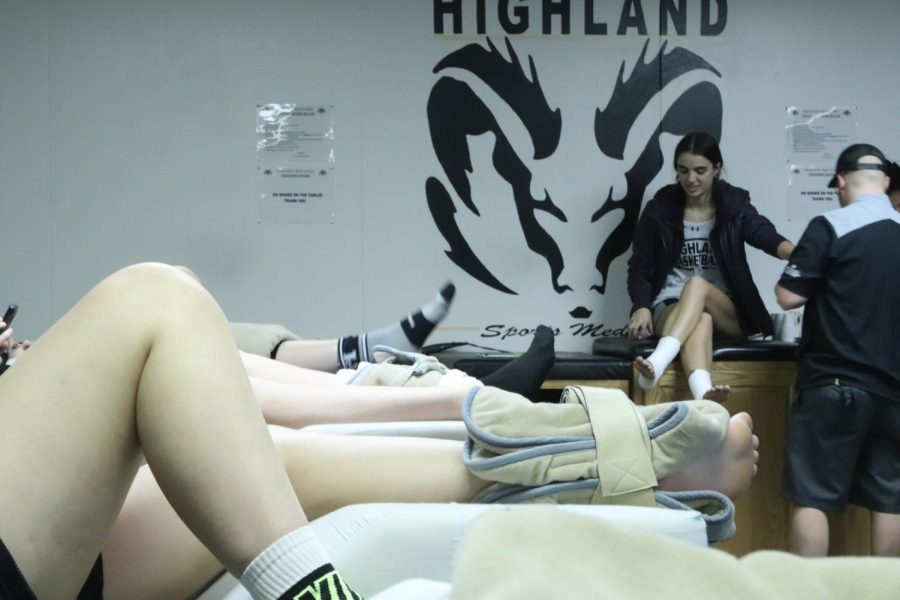 Students take care of their injuries in the athletic trainer's office.

Sports are all about hard work, right? If you commit yourself and train hard, your pains will be erased by the glory of victory… right? As they say, “No pain, no gain.” Unfortunately, this is not the reality for many high school athletes. Sprains, concussions, and fractures are keeping athletes off the field for far longer than they would hope. In trying to train hard enough to win, many teenagers end up training themselves to the breaking point. Instead of scoring the winning point, they end up watching their team struggle from the sideline.

Sports injury is a painful process for everyone involved, and more action should be taken to prevent it. Many of these injuries can be avoided by not specializing in one sport and cross-training as much as possible, according to experts.

One major factor that increases the likelihood of sports injuries is focusing on just one activity. David Bell, study leader from the University of Wisconsin-Madison, defines specialization as when you “can identify a primary sport, you train more than eight months/year for that sport or have only ever played your primary sport.”

In an article, Lisa Rapaport describes data collected from five previously published studies with a total of about 5,600 child athletes. She writes, “Compared to athletes who played the widest variety of sports, youth who specialized the most were 81 percent more likely to experience an overuse injury.”

This statistic is overwhelming. Bell said that “intensive training results in repetitive motions that result in muscle imbalances and increase injury risk.”

And the risk of injury is very high. Highland athletic trainer Mitch McKay said that he treats between 35 to 70 students every day, not including post-practice icing. The majority of students who come in every day are from contact sports like football, basketball, soccer, and volleyball, which can cause many acute injuries like sprains (in ligaments) and strains (in muscles and tendons).

However, chronic issues are often the most difficult to treat because so many people ignore their injury until it’s too late. McKay said that “every once in a while, I’ll get some cross-country runners that just keep running and running and running then they’re like ‘hey, I’ve been in pain for four months, what do I do?’”

Once the issue has progressed this far, the only solution is to take time off.

McKay explained how this is very difficult for students because they don’t want to get out of shape, let down their team, make their coaches angry, or disappoint their parents.

Highland sophomore Lola Maldonado, who runs cross country and track and plays basketball, has suffered from many different knee problems stemming from overuse. Maldonado said that she was very reluctant to take time off from cross country because she herself didn’t want to stop. However, she knew that it was what she needed to do, saying “sometimes, I just want to give up, but I know it’s something I really enjoy and [rehabilitation] is worth the time for me.”

This past cross-country season, Maldonado has had to reduce her workouts and impact, but she hopes that this winter will involve a lot of strengthening to prevent problems like this in the future.

It’s good that students like Maldonado allow themselves to rest and heal, but it would be objectively better to prevent these problems in the first place. One thing athletes can do is cross-train throughout the year. McKay highly recommends working muscles all over the body, saying that weight training and yoga are some great ways to accomplish this.

Over-specialization results in more acute injuries as well as chronic ones because the more times an athlete performs a specific motion, the more chances they will have for something to slip or strain.

Even though so much research suggests that teenagers should cross-train and be careful of their developing bodies, high school sports are as intense as ever. Athletes are expected to train hard once or even twice every day to try to be in tip-top shape for the big game, meet, or race. Many athletes even practice in the off-season for their main sport.

One thing that causes students to practice longer than they should is their desire to play in elite club sport associations. Many of these teams require 9 to 12 month commitments, which means that a high schooler may have to play club during the same season as their school sport. This often requires someone to attend two practices back-to-back, placing an enormous strain on the body.

Highland junior Vivian Hawes plays competitive soccer for the Highland High women’s team and an outside club. She says that the training schedules for the club team and school team don’t overlap, but she does play soccer year-round. When she’s not training for Highland, it’s club season.

Recently, Hawes tore her ACL and had surgery to repair it. She thinks that the injury is related less to overspecialization and more to an unfortunate twist of the knee, but it can’t be totally coincidence because ACL tears are a common occurrence among high-level soccer players. Hawes then named at least three other girls she knows from soccer who have torn their ACLs. This is a serious injury that can hinder an athlete’s career for a long time.

By the time they’re in high school, many athletes like Hawes have already chosen their first or main sport. However, McKay said that most full-ride college athletes “are multi-sport athletes going into college, then they specialize.”

This suggests that it’s better to try out different sports in high school, then decide what you’re good at later on.

Many coaches at Highland, in addition to McKay, strongly encourage their athletes to try different activities in the off-season. It would be beneficial for them to follow these directions and hopefully prevent chronic injuries.

In addition to these physical pains, one thing that affects many high school athletes is a condition called burnout. According to the Quad magazine, burnout is “the endpoint of this breakdown process and is characterized by the absence of motivation as well as complete mental and physical exhaustion.” When playing no longer feels exciting and practice is simply a chore, the beginning of burnout takes hold. Next, an athlete’s performance starts to plateau because they are just so exhausted by the sport. No matter how much they train, if their heart isn’t in it, they will just hit a wall in their progress.

The last and most severe stage is when the athlete simply can’t stand their sport any longer and they quit. For a person who has poured so much time, energy, and emotion into their sport, this is a tragedy.

Burnout can negatively affect a person’s mental health, social life, and school performance in addition to athletics. And yet again, the most effective treatment is to take time off from sport allowing the athlete to relax, reset, and find motivation to continue with their heart in it. Unfortunately, once again, high school athletes don’t have time for this. Most teens don’t want to compromise their season by taking time to deal with their burnout. Instead, they may train harder, which will only accelerate the problem. Burnout is just another one of the many issues that can come with overtraining and overspecialization in high school sports.

Despite all the evidence discouraging teens to over-train themselves, it is still a large problem in sports. High school athletics are simply so competitive, so cut-throat, that students often end up being pushed to their absolute max. A common mentality is that a teenage athlete only has four years, four seasons, four chances, to reach their goal. In this short time, many an athlete will sacrifice everything they have for short-lived glory. They can rest after the season is over, or until the year is over, or maybe just when they’re out of high school altogether and no longer vital to a team’s success.

“Kids are broken by the time they get to college,” Doctor Neeru Jayanthi, director of Sports Medicine Research and Education at Emory Healthcare in Atlanta, said.

Because of this mindset, change may not be in the near future.

In the current expectations of high school sports, there are so many talented teenage athletes being kept out of play by injuries, whether they be sprained ankles or shin splints. The more specialized an athlete is, the greater their chances of getting hurt. In addition, ignoring a chronic injury for months only allows it to grow. In order to prevent issues, athletes should try many sports, work different muscles, and take action as soon as an injury occurs. In addition, students and parents should watch for signs of burnout and treat it accordingly.

If students, their coaches and parents are more careful about their bodies, fewer and less severe injuries should be experienced. This will benefit both the athletes themselves and a school’s sports record because more athletes will be able to play to their best ability, so it’s very important to take note.