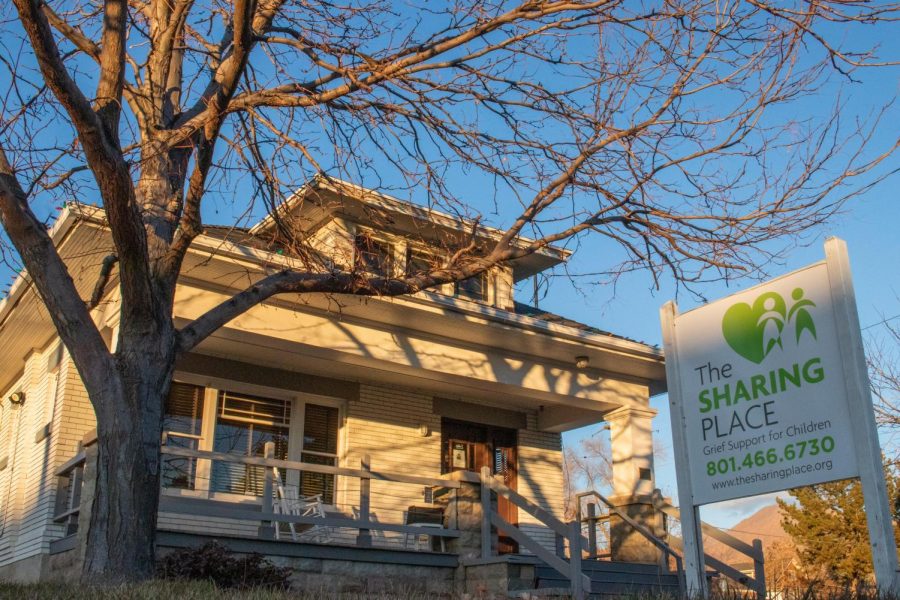 The Sharing Place has now helped over 500 families who have struggled after losing loved ones.

More than 20 years ago, Chris Chytraus found herself a single mother of two young kids grieving the unexpected death of their father. In her search for a resource in Salt Lake City that would help her children process their grief, she soon found that there were none—so she decided to create one herself.

Together with her childrens’ therapist, Nancy Reiser, Chytraus toured the Dougy Center in Portland, OR, the first grief support center in the United States. Using the center as inspiration, they created The Sharing Place, hosting support groups for grieving families. What started with one room and three kids has since grown to two locations with 18 coordinators and 133 volunteers. Just last year, 513 families received help.

Despite this growth, The Sharing Place – located at 1695 E, 3300 S. in Salt Lake City – continues to retain its original homely atmosphere, hosting intimate groups in a building that resembles its original use as a house more than a healthcare facility.

There’s the parent rooms, with cozy leather armchairs facing towards each other in a circle; the littles room, where stuffed dolls with emotions written on their color-coded shirts are lined up on a shelf, and a short set of steps leads to an area referred to as the sanctuary, where photos of dead loved ones cover every inch of the wall; the pre-teen and teen rooms, walls decorated with arts and crafts supplies and projects; and the volcano rooms, where all four walls are padded and the area is filled with objects to squish and throw.

Outside is a colorful memory wall, covered in wooden blocks individually painted by children in honor of their person, containing so many blocks that new walls were built to contain them all, a friendly looking campfire area, and a memory garden, where notes written by children to their person hang from the branches of trees.

Dina Petersen, Outreach and Education Coordinator, group coordinator, and volunteer at The Sharing Place, has always loved kids and volunteering in the community. After learning of the volunteer opportunity through an advertisement in the newspaper, Petersen initially agreed to a one-year commitment; she has now been at the Sharing Place for 18 years.

“They [kids who are part of a program at the Sharing Place] feel so much less alone here…they bond with each other over their stories, and this kind of becomes like their second home,” Petersen said.

A person’s journey at the Sharing Place begins with a phone call to the center to schedule an intake, during which they meet with either Petersen or Program Director Jill Mcfarlane, tour the Sharing Place, and share their story so that they can be assigned to the right group.

The groups are separated depending on age and sometimes cause of death; one example is the group for those whose person died by suicide. The ages of children attending range from three to eighteen years old, separated into the littles group, the school-age group, the pre-teen group, and the teen group. While children attend these sessions, parents stay in the building as well, attending their own parent group.

The activities done and topics discussed at The Sharing Place are tailored to the needs of the different age groups; the littles group may do a lot more crafts than the teens group, who prefer to just talk, while the school-age group’s favorite thing to do might be releasing their anger in the padded “volcano room” through pillow fights, but across the different groups the overarching goal is the same: to create an outlet for their emotions and a place to discuss them free of the fear of being judged.

“You get to say anything you want in a place that doesn’t judge you for how you feel with other kids your age that know what you’re going through,” Petersen said.

Every group also begins the same way: an opening circle where each person says their name, who died, and how they died. Petersen says this is especially important for younger kids, who may be misled by “softer” terms such as “lost” or “passed away” to believe that their person is only temporarily gone.

“Every time I talk about grief, I say the words die, dying, death…we use all those concrete terms here…because younger kids need to know that it’s permanent,” Petersen said. “When you say things like ‘we lost our father,’ they’re like ‘well I lost my backpack and we found it, why can’t we go find him?’”

“I remember being in the room where my dad died looking around for his spirit because I thought it must be still in this room,” Sierer said.

Recognizing that everyone has a different grief journey, The Sharing Place leaves it up to individuals to decide how long they want to continue attending.

“We don’t say, ‘you’re here for four weeks and then your grief’s over.’ Grief for most people is never over, and so the kids decide when they’re ready to ‘close’ out of the sharing place, and that just means that they’ve learned what they need to learn,” Petersen said. “They talk to the coordinator about it and announce to the group that they’re closing, then they come two more times and we have a nice closing ceremony for them.”

Sierer agrees that everyone’s grieving process will be different. For him, religion was important to his grief journey, as the belief that he would see his parents again allowed him to reach acceptance. Another source of comfort for him is his last exchange with his mom.

“One day I was in the front yard playing, and I suddenly had this feeling that I should tell my mom I love her…so I did, I walked in the house and talked to her for a second, said ‘Mom, I love you,’ and she said she loved me, and then I went back out and played…and that’s the last memory I have of my mom,” Sierer said. “Had I not taken that opportunity to tell her I love her, it would probably bother me to this day.”

Ben Voegele, Highland baseball coach and grief counselor at The Sharing Place, began volunteering at the suggestion of his wife, at a time when he was dealing with his own grief.

“I had a pretty rough couple of years where it was my dad, then my grandma, then even my dog. It was just one thing after another, and it still affects your psyche no matter what age you’re at,” Voegele said.

Voegele says volunteering at The Sharing Place has been a fulfilling learning experience that has helped him gain perspective and value empathy. These are things Voegele tries to instill in his team, who also volunteer at the Sharing Place by cleaning the grounds and maintaining the building over the summer.

“It’s equally important to me that my players come out as good people, not just good baseball players. I think the Sharing Place has definitely opened my eyes to that,” Voegele said. “I want these guys to realize that it is important to show empathy to people. Win or lose, that really is besides the point, high character is what we’re about.”

What makes The Sharing Place special, Voegele says, is no “special trick” or “magic.” It is just an environment where people can take off their masks and openly express whatever they are feeling.

“Sometimes people forget that it’s okay to be happy because they’re supposed to put on this sad face all the time, or the flip flop of that is they’re always supposed to be smiling no matter what and be strong no matter what, and this is a situation where they can drop that guard and just be,” Voegele said. “It’s not necessarily about being happy, being sad, being angry…they can just be.”

Voegele tries to create the same safe atmosphere in the baseball program, something he says is especially important considering how prevalent of an issue mental health has become among adolescents, and the added stigma on men expressing their emotions.

“We’d be better off in society if we just allowed guys to drop their guard and show their emotions, and I tell my players that too,” Voegele said. “We’re not sitting out in the dugout with kleenex or anything, but I check in with them…not just about baseball, not just about grade checks, but how are you doing off the field, how’s life, how are things at home…just to let them know there is help if they need it.”

Sierer says it is important to both display your emotion so that people can help you during your time of grief, and to accept help when people reach out.

“If someone who tries to be as tough as me can say ‘hey it’s okay to have someone give you a hug and say ‘it’ll be okay,’ then it’s okay for anyone, right? It doesn’t make you less of a tough guy to accept that,” Sierer said.

Petersen says The Sharing Place is always looking for volunteers; if anyone is interested in volunteering, there are two volunteer trainings a year, one in the summer and one in the winter, and the next one is coming up around January 9th. It is usually held from 9 to 4:30 on a Saturday.

Anyone who is interested must also be at least 18 or older and get a background check, or a teacher referral if they are a high school student.

While groups are usually held at the Sharing place from September to May, last year April and May were held entirely on Zoom. The center started this year in person, and has since decided to move online for the holiday season.

The pandemic has also affected the organization is less direct ways; an increase in suicides during the pandemic has meant more people grieving deaths by suicide; secondary losses like seeing friends and attending school can make grieving harder; and as a non-profit, The Sharing Place relies entirely on donation to function, which have been less this year due to the economic impact of the pandemic, which has put on pressure for many businesses.

Although sessions will be held through Zoom during December, the organization will check numbers again in January, hoping to make a return to in-person sessions whenever it is safe.

Petersen encourages those grieving to prioritize processing their emotions and to reach out for help when they need it.

“We don’t assume that our sibling is going to die by suicide, we don’t assume that our parent is going to die in a car accident suddenly…so I think people just think ‘We’ll just be strong and we can do this,’ well if they don’t…get support sometimes they have a harder future…relationships are harder, they don’t get a handle on their anger, they have trust issues, depression, things like that,” Petersen said. “So it’s just super valuable to have in our community. We need more places, whether it’s the Sharing Place or somebody else, we need more support out for the community.”