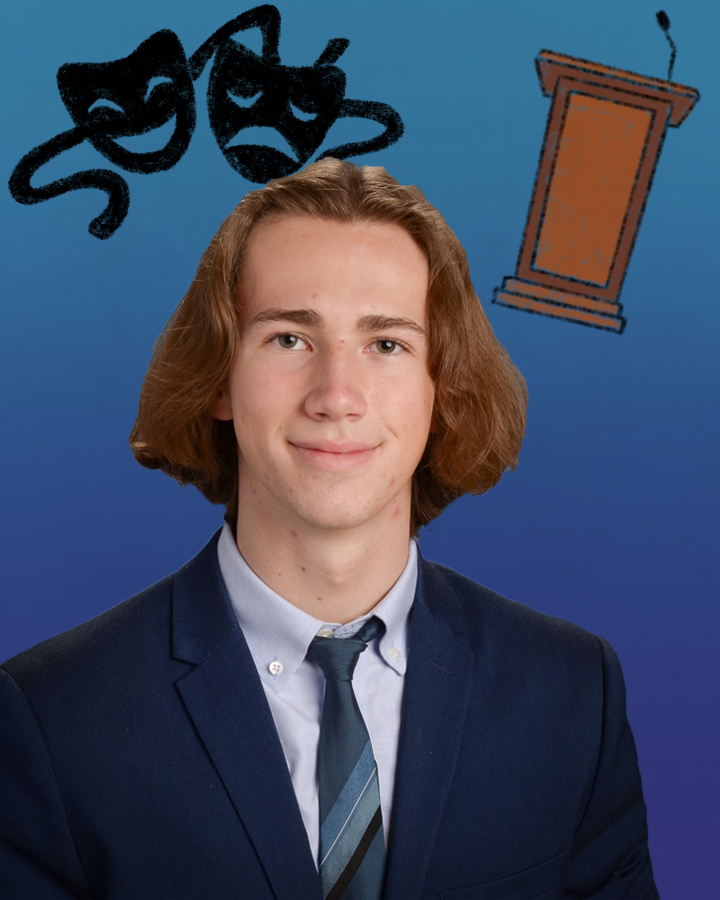 As a young boy, Kai Schwemmer found it easy to socially engage with anybody he came across. With multiple pictures of him shaking hands with complete strangers on a beach in Germany where he grew up, it is clear that Kai Schwemmer has a passion and talent in connecting with the public. Schwemmer’s history of success in debate and public speaking no doubt led to his achievement in the Sterling Scholar award for the category of speech.

At a younger age, Schwemmer had always wanted to be in the FBI and dreamed about serving the country in any way he could. However, in eighth grade he discovered his love for debate and politics after debating historical topics and public issues in class. Encouragement from his MELP history teacher also fueled his passion in this field.

Schwemmer explored varying topics for his involvement in debate and found different traits about himself and special capabilities that assist him in his work. Primarily, he recognized his useful ability to easily retain and remember information that is useful in his cases and ideas. Among his abilities is a true appreciation for what he does.

“One thing I’m most proud of is my ability to speak passionately in a way that doesn’t seem manufactured; when I speak, I don’t want it to feel like part of a debate or a Congress session, but rather a true passion.” Schwemmer said.

Along with his newfound abilities and experiences, Schwemmer noted that he has always been passionate and capable of public speaking. He explained his love of crowds and appealing to the public. With this, he also expressed obstacles that he has both overcome and utilized for his own gain when it comes to public speaking.

“Despite my love for and long history public speaking I still get physically nervous, my mind may be calm and prepared, but my heart begins to beat quicker and my hands shake a little as I grip my notes or speech.” Schwemmer said. “I’ve come to love this feeling, it’s a natural adrenaline that I believe helps me debate better.”

Along the years, Schwemmer has certainly created and achieved multiple goals through his participation in various tournaments and competitions in student congressional debate. Schwemmer’s debate coach, Kimberly Hunter, commented on her pride in his achievements and talents in engagement and openness.

“Kai is consistent and his openness and willingness to help out wherever he’s needed has been a huge benefit to the team, which is why Kai was chosen as the team captain.” Hunter said. “I am super impressed with his ability to take responsibility, think through things and remain open-minded.”

Among his many achievements, one tournament stands out in his high school career and showed what Schwemmer says is his greatest accomplishment. The Marie Clegg Jones Memorial tournament at Utah Valley University (UVU) is one of the most competitive in the state of Utah and is even held at a higher value than state competitions by certain schools and coaches. Schwemmer paved his way through the various rounds and matchups until he found himself at the end as the top ten winners were read off. As his anticipation grew, Schwemmer was happily surprised to find he finished in first place.

Schwemmer’s interest and talent in debate is also primarily seen in his role as varsity team captain for the debate team as well as his large online political presence. With an impressive gathering of over 19,000 followers, Schwemmer has created a wide and well-known reputation for himself.

Including his larger accomplishments, Schwemmer’s participation in various debates with other large and well-known creators has aided in his success. Schwemmer has also written op-eds (opinion and editorial pages) for youth-run political organizations and organized a fundraiser that raised over $1,400 for wounded warriors.

Unfortunately, with a large following and significant presence in politics on the internet, there is always a chance of conflict. Although it may not be immediately clear, dangerous and uncomfortable situations can easily follow any political statements and opinions that arise on the internet. Schwemmer has faced this type of behavior multiple times.

Throughout his career and participation in politics and debates, Schwemmer has experienced a variety of unpleasant actions towards him. These actions include him being “cancelled” numerous times, attempts of having him fired, leaking of his address, and great quantities of death threats.

Though these threats and incidents are very harrowing, Schwemmer remains faithful to his field of knowledge and work. He manages to balance other hobbies and interests with his passion and maintains a healthy lifestyle.

“I have a great love for fitness and self-improvement, I’m a great proponent of cold showers and spending time in nature.” Schwemmer said. “I like to go to the gym five days a week which improves my mood more than anything in the world.”

Along with his enjoyment of fitness and release through exercise, Schwemmer also has a love of philosophy. Some of his favorite thinkers include Nietzsche, Aurelius, and Aristotle. Schwemmer often spends his free time doing hobbies such as listening to political commentary and reading.

Schwemmer has plans to intern at state or national levels in his time at college as well as to continue his online presence and meet other politicians. He hopes to run for office at the legal age of 25 and ultimately has a goal which he has desired for many years to eventually become the President of the United States of America. Some strangers who shook a little boy’s hand on a beach in Germany might have shaken the hand of a future president without ever knowing it.

Kai Schwemmer has a long history of hard work and will surely continue moving through his career with passion and respect. He has left it no doubt that his future will be one of success and fulfillment of big goals. His Sterling Scholar award is one step in his long and hardworking path of success.