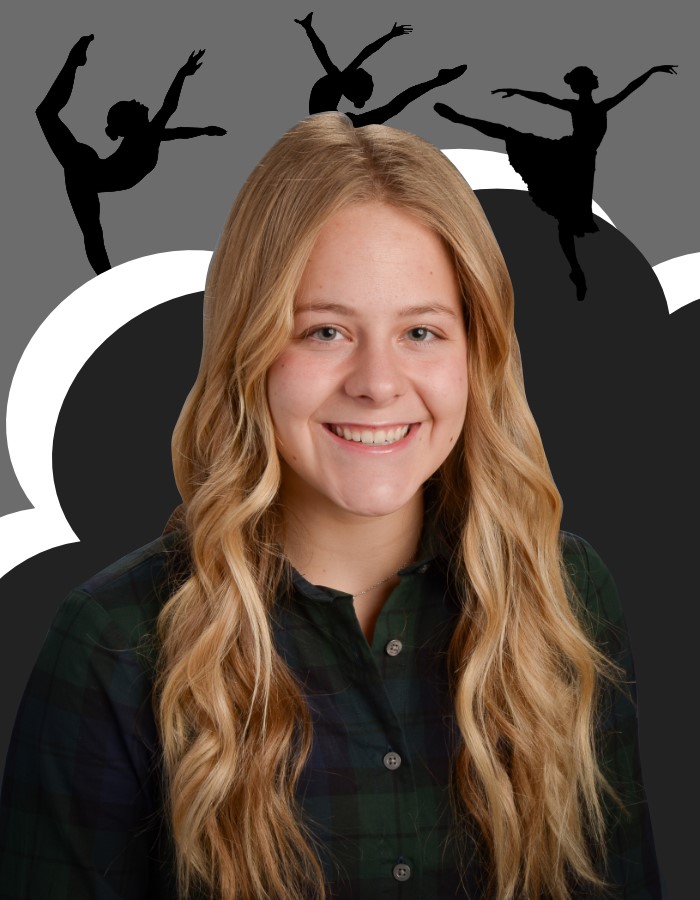 The spotlight is shown on Lizzie Hales while she gracefully dances in her favorite genre of dance — contemporary. Though she applies techniques learned in the studio, the emotion she projects circulates the room and touches the audience. Though it might seem like a method dancers use, Hales is not acting. Her movements and emotions are her paintbrush and the stage is her canvas.

Her dancing career bloomed at the age of three, when she started dancing with her aunts and grandma. When feeling so much joy while dancing, she begged her mother to enroll her in lessons. And so it began. She danced at the Silhouette studios and the Dance Company before taking a two year break in first grade.

Two years later, the Hales family moved neighborhoods which put her in a demand for new friends. She was brought back to Silhouette because she believed it would be faster for her to meet people. Her plan succeeded, as she met new girls through her dance friend Eliza Randle.

Those girls became some of her best friends. They spent every second with each other, from walking to school together to dancing in the studios of New York City.

But those friendships seemed to change when the girls were preparing to depart from Hillside Middle to the massive halls of Highland High.

As an eighth grader trying out for a spot on the Highland dance company, Hales was nervous of what to expect. Before the tryouts had even begun, her dancemates told her she would not make it. But despite having so many negative influences surrounding her, she let her light shine on stage and was one of three freshmen who made the team.

“It was really hard because everyone that I had ever danced with growing up did not make it. They all kind of just hated me, so I had to figure out who I was all by myself and make new friends,” Hales said.

Although it was difficult for Hales to be apart from her friends the first year, she had experience starting fresh. It was considered a blessing in disguise because she was able to find herself and become a more advanced dancer. It also opened up new doors for her as she was able to make friends with older girls who were strangers before.

That year, Hales became best friends with dance company president Sydney Johnson. Their close relationship helped her recognize the potential of being the next president and ever since then, she has wanted to be just like Johnson.

“She was fully there for dance company. She loved everyone on the team, whether they were a freshman that was shy and had no friends or her senior friends. She was just a very kind, lovable person,” Hales said.

Hales tries to instill the traits that were so embellished in dance company when Johnson was president.

“She is a huge role model to me and following in her footsteps has always been a dream of mine,” Hales said.

She has lived up to that dream. Not only has she become president, but she has made dance a fun and loving environment for everyone on the team and tries to include each individual no matter their social or grade status.

“I think Lizzie is an amazing president. She is so caring about everyone on the team and makes the best out of every situation. She has done everything possible to make this year a great experience for everyone,” teammate Abby Smith said.

Complimentary to her title as dance company president, Hales has also won the sterling scholar dance award. She has dreamt of winning the award after Annie Lewis won it two years ago.

“I was really surprised when I won sterling scholar; but I was proud of myself after putting forth so much work and in both dance and school for the past seven years,” Hales said.

She has achieved making her name known throughout Highland, and will continue next year at Utah State University. She hasn’t decided if she wants to try out for the university’s dance team, but is thinking of studying psychology.

Regardless of if she continues her dance career in college or not, she will never stop doing what she loves. Whether it’s on the dance floor or in her kitchen, you will never see Lizzie Hales standing still if the music is playing.