We Need to Support Women’s Sports 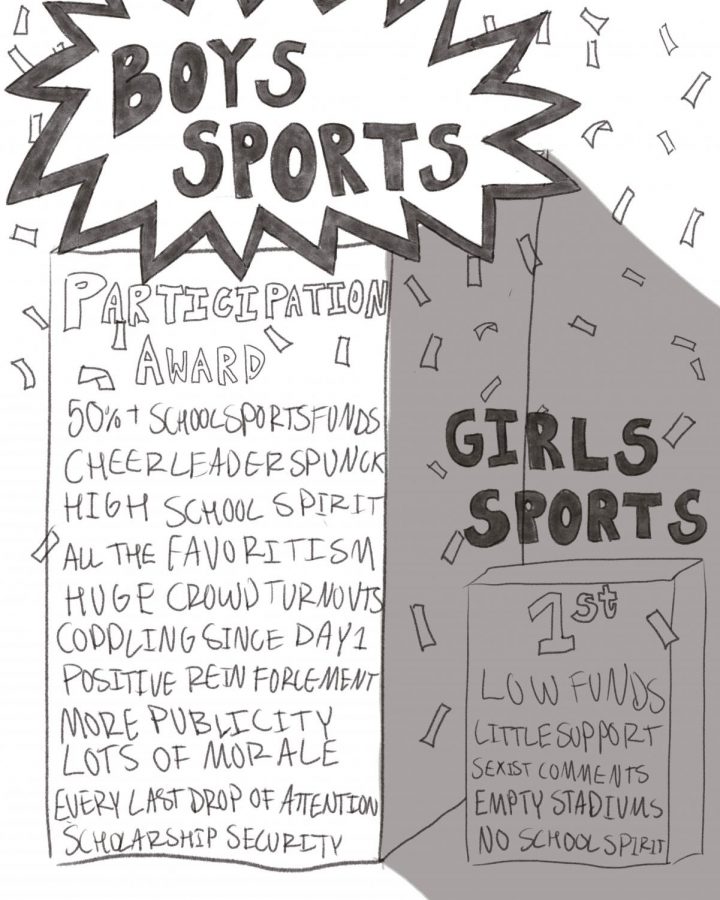 In 2019, the national U.S. women’s soccer team won their fourth World Cup, while in 2018 the men’s team failed to qualify—and yet the total amount of money the women earned was less than what each of the men’s players would have walked away with had they achieved the same feat.

This type of disparity between male and female athletes is not just limited to the national level; it can also be seen in colleges and high schools. Anyone who has attended both a boys basketball game and a girls basketball game at school and seen the glaring difference in crowd size is aware that this disparity exists.

In 1972, a federal civil rights law known as Title IX was put into place, requiring all federally funded schools to practice equal treatment of students regardless of gender, in the classroom and on the field.

Although the law applies to all programs within schools, it is most well known for its huge contribution within athletics.

Equal treatment in athletics as outlined in Title IX means having equal quality and quantity of equipment and supplies, fairness in scheduling of games and practice times, and equal financial support, facilities, medical services, and publicity between the men’s and women’s teams.

Before the law was put into place, girls made up only about 7% of high school athletes in the United States. According to the National Women’s Law Center, the number of female athletes has since increased to 6 times as much as pre-Title IX rates.

However, to say that Title IX accomplished complete equality would be far from the truth.

While we’re on the topic of football, let’s address one big myth about Title IX: its conflict with men’s sports. There isn’t one.

Title IX often becomes a scapegoat when a school decides to cut certain men’s sports, when in reality it is usually done to preserve the excessive budget allocated to football and men’s basketball. Rather than cutting down on  funding for these sports, many schools choose to cut other men’s sports instead.

There is nothing in Title IX that requires or encourages the cutting of men’s teams. Athletic participation for men has only grown along with women since the enactment of Title IX, although it experienced a brief decline between the years 1984 to 1988—which happen to be the years that Title IX was not being enforced due to the Supreme Court’s decision in Grove City College v Bell.

So it’s clear that Title IX has only done good. However, simply satisfying Title IX should not be the goal. Striving for true gender equality in sports requires going beyond providing an equal number of teams and facilities. Why should we applaud something that should be a given? We must go beyond these minimum requirements and look at where inequality continues to persist.

Paige Cooper, Highland junior on the women’s basketball team, says the biggest difference between the treatment of the men’s and women’s teams can be seen in the amount of publicity and support from the student body that they receive, referencing support from cheerleaders as an example.

“During Freak East last year they didn’t even post the girls’ times on their social media…there shouldn’t be a reason that they’d post just for them,” Cooper said.

The added incentives to attend the boys’ games also contribute to the disparity in support, which can be seen in the great difference in crowd size.

“They like entice them [by] giving out t-shirts and stuff but they don’t for the girl’s team. I definitely think that if they’re going to entice then entice people to come to the women’s sports because the boys sports have enough and they have a lot more resources as well,” Cooper said.

Former Highland softball coach Robert Campos says that crowd size impacts level of play, as having an audience naturally creates an incentive for players to perform their best.

But there seems to be a lack of enthusiasm when it comes to girls’ games.

“[People]  need to be positive about coming to the girls sports,” Cooper said. “You hear the cheerleaders complain like ‘oh we have to go cheer for the girls sports,’ but we work as hard as the boys. We shouldn’t get less [support].”

On the question of whether she felt the women’s teams received the same amount of respect as the men’s, Cooper had a definitive, disheartening response.

“They don’t support us equally and they definitely don’t want us to be supported.”

According to the Women’s Sports Foundation, by the age of 14, girls are dropping out of sports at twice the rate of boys. By age 17, 51% will have quit. It is factors such as lack of support that contributes to this amount.

Campos says that the stigma around girls playing sports is another factor that can discourage many from participating.

“[There] tends to be a stigma behind [trying out for sports]. If they’re ‘overly athletic’ or maybe ‘overly aggressive’ or things like that I think there’s unfortunately a social stigma that keeps them from wanting to go out and do something like that,” Campos said.  “I think a lot of it also is that stigma behind it where if you’re an athletic female then you must be of a certain sexual orientation…[girls] don’t want to be stigmatized by it.”

The stigma around female participation in sports can be traced back to gender stereotypes. Women are expected to conform to stereotypes that describe them as gentle, caring, submissive—traits that conflict with the fast-paced, competitive nature of sports.

The bottom line when it comes to increasing athletic participation in girls, Campos says, is exposure. This means encouraging girls to play sports from a young age and improving program accessibility.

“There’s a ton more recreational dance or even cheerleading or things like that so they’re not really pushed into other sports,” Campos said. “They have to have some sort of encouragement. And it starts when they’re young, too.”

According to the National Women’s Law Center, females who participated in sports were more likely to graduate, have higher grades, score higher on standardized tests, and do better in science classes.

Sports participation in women was also linked to increased labor participation and 14% higher wages. Unsurprisingly, there is a correlation between athletic and business success in women: a study conducted by espnW and EY found that 52% of c-level executives surveyed played a sport at the university level, and 80% of female Fortune 500 executives played competitive sports.

Girls in sports are 25% less likely to smoke or do drugs, and report better health and body image than girls who don’t.

Women of color in particular consistently benefit from increased academic success when participating in sports. However, this is the same demographic that receives the fewest opportunities to play.

With so much to gain, it is important that women don’t feel discouraged from participating in sports. In the bigger picture, we need to stop perpetuating harmful stereotypes and myths that discourage girls’ participation in sports and undermine their ability to feel comfortable, supported, and equally respected while doing something they love.

As a student body, we have to publicize and attend more women’s games, recognize their hard work and achievements, and give them the respect and support they deserve, because by increasing support and publicity for women’s sports at our school, we not only improve the players’ performance in their games, but encourage them to continue doing something that will have measurable positive impacts on multiple other aspects of their lives.