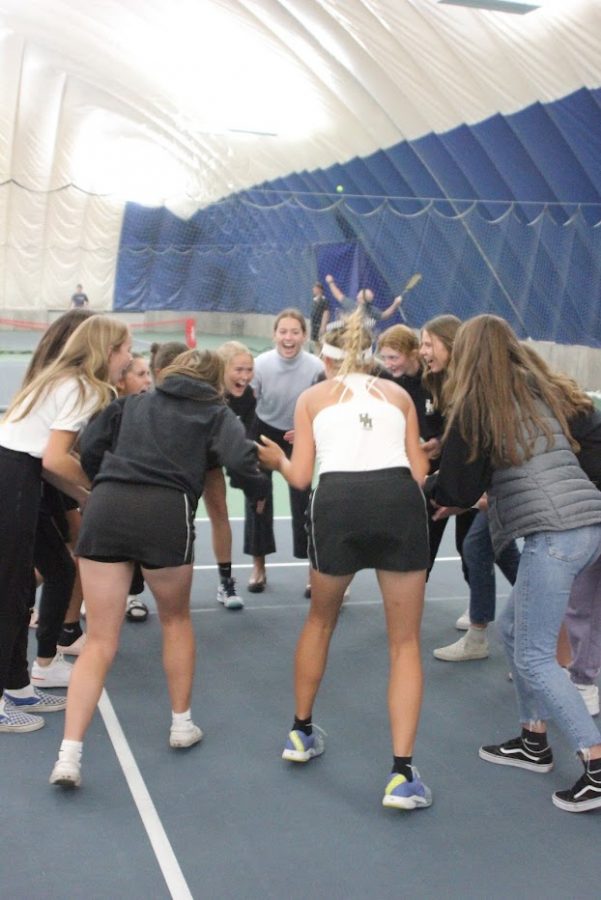 Lucy Foulks and Grace Harman had already lost the first set in a best-of-three match and now found themselves down 4-3 in the state championship match for second doubles.
A loss would have meant second place for the duo. It also meant the Highland girls tennis team would fall into second place as well, a fact the duo learned only moments before.

“Sometime in-between the first and second set, I was told that both of them had lost and that now it was kind of now or never for us,” Foulks said. “That news pushed us to then be like ‘let’s get this done, no more messing around.’”

Foulks and Harman dominated the rest of the match, securing the comeback and a state title for themselves and their teammates.

“We had a few different paths to the championship when the day started, but in the end it came down to the last two matches of the day,” Highland coach Jeanine Elsholz said. “We knew we had to win our doubles match and that Woods Cross had to lose theirs.”

The atmosphere at the match could easily be described as electric and thundering. With more than 150 spectators watching and cheering on the team, Foulks and Harman were seconds away from victory and a state title on the final championship point for the second doubles component of the state tournament.

“I couldn’t believe it,” Foulks said. “I was ready at the net, staring at my opponent, and thinking to myself I’ve lined up to play a point a million times but never has it been to win state. It was so surreal.”

As soon as the point was won in favor of Highland, fans stormed the court. Cheers and chants of joy took over the building and all that was audible was the pure happiness radiating from both the supporters and the team.

“When we won, I melted into a puddle of tears,” Foulks said. “It was such a surreal moment that I didn’t even know what was happening because a hundred people stormed the court and started to hug me, the reality of the win hadn’t hit me yet. Seeing all of the hard work put into the season pay off and get us the win was overwhelming and I just started sobbing.”

After some of the excitement on the court had subsided and the reality of what had just happened finally set in, the team was given the news that the second doubles win had given the Rams the two points needed to tie Woods Cross for the team state title, putting the final point score at 17 for both schools.

“After I realized that the match had won it for the team, I was so happy,” Foulks said. “There’s so few chances in life when you get to do that [win] for other people and I was just so glad to bring the team to the finish line.”

In between the first and the second set, the duo found out that the other matches going on for first and third singles had resulted in two separate losses for Highland, putting them behind Woods Cross. The only way to secure a title was through the win of the second doubles match over Timpview.

After the duo found themselves down a set and trailing, something within the team changed and Foulks and Harman were able to rally against their opponents and win both the second and third set of the match.

“We were so close and we had fought back so hard and we didn’t want to disappoint the team or ourselves,” Foulks said.

Foulks credited the combination of the energy in the stands and their want to win, as well as the idea that if they “were going to win, it was going to be this year with these girls,” as being the factors that pushed them forward and into a victory.

“I think that the screaming after every point was liberating and the energy of the crowd was just so insane that it pushed us to keep fighting,” Foulks said. “The thought of wanting to get the best of the last few points ended up giving me the strength I needed to make a comeback and win the match.”

The weekend tournament consisted of a hard-fought battle between Highland, Woods Cross, and Timpview for the championship, but the team kept on rallying, giving Highland a fighting chance to bring home a team victory.

“What I love about our state championship is that it took every single varsity player to make it happen, it truly was a team effort,” Elsholz said. “Every player contributed to the point total, and we needed every last point to finish in [a tied] first place.”

Following the win of the final match, the Highland girls’ tennis program claimed a title that the Rams hadn’t held since 1992. The team is hoping to use the victory as well as the doubles experience to inspire future Highland tennis players to stay strong through adversity in matches, as well as grow the program for generations to come.