Roe v. Wade Won’t go Down Without a Fight 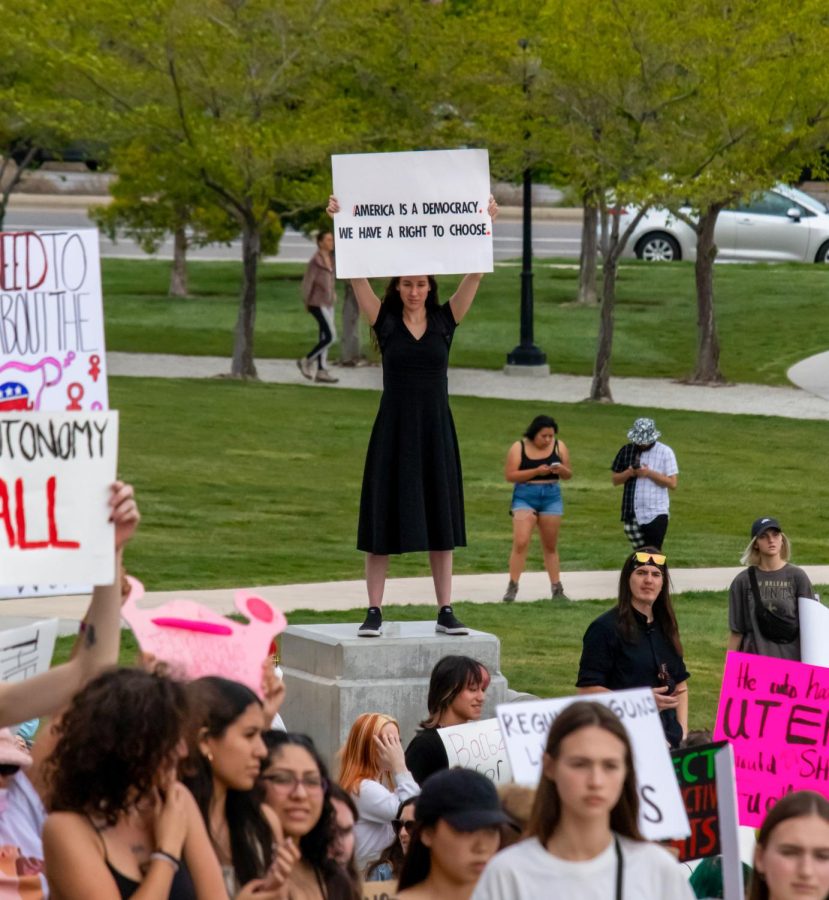 Protestors hold signs at the Capitol on Thursday.

Tuesday, May 3 was a typical spring day in Salt Lake City: around 50°, slightly cloudy, and windy. Driving up to Capitol Hill was a mess because of traffic and construction all the way down State Street. But drive they did, in light of a recent leaked Supreme Court opinion that would overturn Roe v. Wade and strip millions of women of their rights to abortions and other reproductive healthcare.

Nobody wanted to be there that day, because nobody wants to have to rally their government in plea of basic human rights such as autonomy over one’s own body. The Supreme Court draft had been leaked only a single day prior, so this protest was organized and carried out very swiftly. People were so angry about the news, and they realized that they needed to show an immediate and definitive response in support of upholding Roe v. Wade.

Gayle, on the board of planned Parenthood, explained that “overturning Roe v. Wade is very scary because abortion is healthcare.” A large shiny button on her jacket read “everyone loves someone who has had an abortion.”

In terms of legislation, it is unclear whether anything can be done to oppose the Supreme Court decision besides show public outrage.

“I think this is the kick in the butt that we needed, but I think the next several months are going to be very difficult,” Gayle said.

While the protest was organized by Planned Parenthood, most of the attendees were young people and students. Many high school faces were spotted in the crowd, including some from Highland.

Juniors Kayta Guillory and Mary Crowell were able to make it to the rally, although they were sad more of their friends couldn’t come.

“I feel like I never expected to fight this, it seems like we already established [women’s rights],” Guillory said.

Crowell chimed in, asking “why are we going backwards?”

During all of these interviews, it was difficult to hear because of the deafening chanting in the background. The crowd cried many call-and-response phrases, including “hey hey, ho ho, the patriarchy has got to go!” and “two, four, six, eight, separate the church and state!”

After their time on the capitol steps, protestors marched down the hill all the way to Washington Square Park where the City and County Building stands. Eventually that evening, when a long day of protesting had come to an end, participants went home knowing this wasn’t over.

On Thursday the same week, an even larger protest happened at the Capitol. This one had allowed for more planning and preparation, which paid off in numbers as the crowd was estimated to be around 1,500. More protests have continued to happen in the subsequent time.

People have shown that they are outraged about the Supreme Court Draft, and they will continue to show up and protest. It is unknown what will happen in the future regarding Roe v. Wade, but it’s guaranteed that women’s rights won’t go down without a fight.